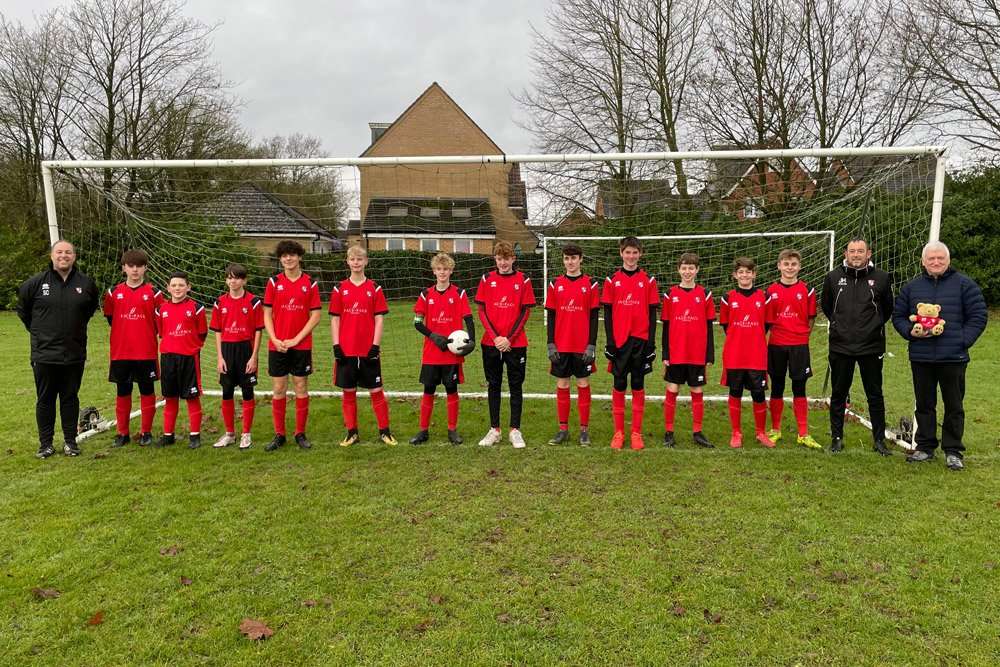 Last month, Dad told me some very exciting news! He had decided to sponsor the Long Stratton U15’s football team. This means that their football shirts have the Face to Face Finance logo printed on the front – how cool is that? I was even lucky enough to get a shirt of my own!

The best part about Dad sponsoring the team is that we get to go along and watch their matches. On Sunday 6th December I made the short trip to Long Stratton to meet the football team and watch a game of Grassroots football.

I really enjoyed the game and have written a match report to let you know what happened. I had a lot of fun watching the football and writing the report, maybe I’ll become a sports journalist when I grow up!

Long Stratton U15’s welcomed Harleston Youth to Manor Rd for a 10.30am kick off.

The pitch was a little damp after a rainy week, but it was playable, and the game was on.

Long Stratton started well with both teams creating some good chances and Stratton only narrowly missing the target.

Unfortunately, this gave Harleston the edge to score their first goal in the game shortly after. The goal scorer beat the offside trap and the Stratton keeper to get the ball in the back on the net. Our Stratton keeper went on to make some outstanding saves in the rest of the game, keeping the away team out.

Chances were taken by both sides during the half with Harleston being more clinical with their finishing. The first half finished 1-4 to Harleston, with Alfie getting Stratton’s goal.

At half time, the coach gave a motivating team talk, with an emphasis on keeping it tight for the first ten minutes to build on Stratton’s first half performance.

Both teams took to the pitch again and, like the first half, chances were created by Stratton and Harleston making for a really entertaining match!

Stratton finished the second half with George A getting a goal and Harleston grabbing another four. Despite the score line the Long Stratton boys never gave up the fight until the final whistle.

At full time the score was Long Stratton 2, Harleston 8. A very exciting match!

Unfortunately, due to more Covid-19 restrictions, football matches have been postponed again for a while. I’ll have to wait a little while to see the team play again, but I’m really looking forward to when I can!

Do you play in a football team? Or have you been to watch a football match with your friends or family?