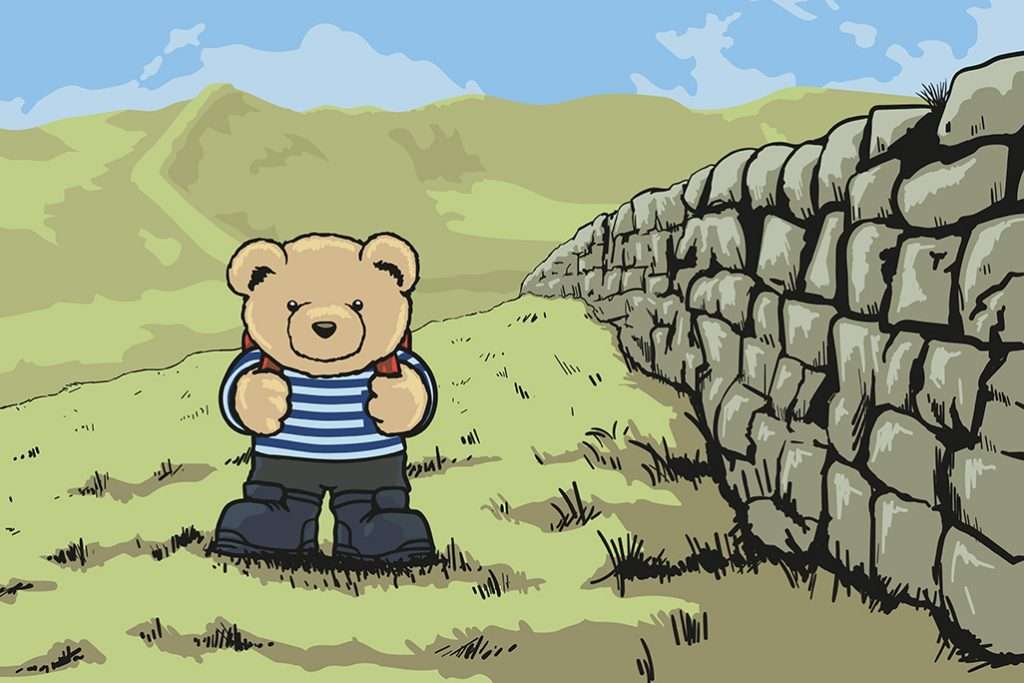 It’s your pal, Eddie, and I’m here to tell you that I have been on a big adventure! I learned a lot along the way too.

This month I went with Mum and Dad to walk along the Hadrian’s Wall Path!

Have you heard of Hadrian’s Wall? It was built a really long time ago, during the Roman Empire. You may have learned about the Romans at school. Hadrian’s Wall went from one side of the country to the other and was 73 miles long!

Some of the wall isn’t there anymore because the stones have been used to build buildings. We did see some bits that are still standing along the way though. I think it’s amazing that a wall that old is still standing. Even though some of the wall has gone, there is still a path that takes you along where the wall would have been.

It was going to take a whole week to walk from one end of the path to the other. I was looking forward to marching the whole way like a Roman soldier!

We started in a place called Bowness on Solway. We were excited to get going but knew it was going to be a long day. The guidebook said it was 14.5 miles to get to the next place where we would stop for the night.

In the end we walked 17 miles! I was very glad to have a sit down when we finished our first day of walking. I can’t really remember which other places we started each day walking from, I was too excited to get going again. Dad said that we walked the same sort of distance every day though. Phew!

I really enjoyed walking along the path. We got to see some lovely landscapes and I took pictures of all the best views. We walked so far that my paws started to hurt – I wonder how many steps we did?

After a couple of days, walking got much harder. We were very tired and it stopped being a fun adventure so we made a difficult decision. We decided to finish our walk early.

We tried really hard to finish the Hadrian’s Wall Path, but we didn’t quite manage it. We stopped one day before the end because our paws were covered in blisters and Dad’s leg was hurting.

I was really sad because we hadn’t finished our adventure. I wanted to tell my friends at school that I had marched all the way along the wall like a Roman Soldier.

I didn’t say much when we were eating dinner and Mum asked me what was wrong. I told her that I was sad we had failed on our mission to walk the whole way. Mum gave me a hug and told me that we didn’t fail, we just knew when it was time to stop. She said this is an important skill to have.

Mum said that it is important to be determined but it’s also important to listen to your body. If you don’t, you could just end up hurting yourself.

We just have to accept that we had to stop, but it’s no big deal. We had already achieved so much on that walk and we could always go back and finish it another day.

When we got home, we had plenty of rest! I didn’t want to walk anywhere again for a while so we spent the weekend watching films on the sofa.

Have you had any fun adventures recently? I’d love to hear all about it!