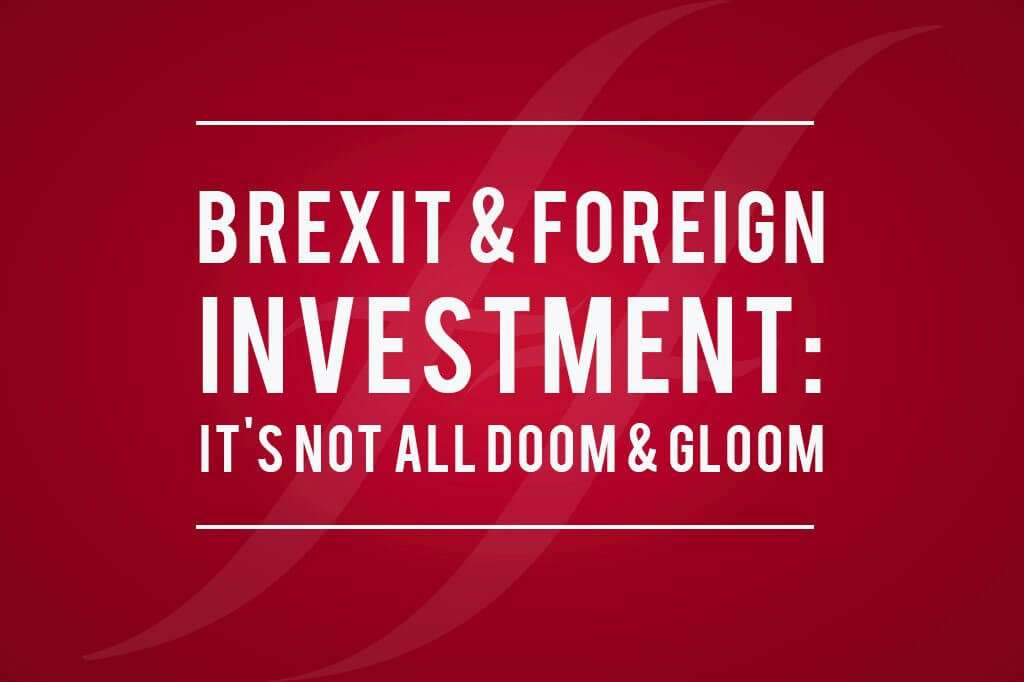 Brexit and foreign investment: it’s not all doom and gloom

There have been a lot of headlines about how the uncertainty surrounding Brexit, particularly the current lack of international trade deals, will have a negative impact on investment into the UK. But look a bit closer and there are some good news stories too. China, for example, is certainly taking advantage of the opportunity.

After the Brexit referendum in 2016, the British Government reiterated its commitment to free trade. The vow was to strengthen business ties outside the EU and build a truly global Britain.

But with a somewhat uncertain future, organisations such as the Chamber of British Industry predicted a fall in business investment following the Brexit vote.

Yet investment in the UK increased by 1.7% between the third quarters of 2016 and 2017. Employment has risen to its highest level since 1975. And Chinese investment continues this positive trend:

Why is China investing?

There seem to be several factors at play contributing to this effect.

Firstly, China just doesn’t see Brexit as such a big deal as we do. They generally don’t really understand why the choice has been made, but they still see plenty of opportunity here.

Secondly, the post-Brexit fall in the value of the pound helped lure investment from China to Britain.

Thirdly, Chinese investors are looking to diversify out of home markets, and the UK is a good place to do that. Unlike the EU and the US, the UK has not signalled any meaningful toughening of foreign investment.

There are some political shifts in China contributing too. Beijing is cracking down on foreign deals by mainland companies. Investors are therefore using Hong Kong as a conduit for overseas deals as it has judicial independence. This independence may be under threat – another reason for investors to take capital out of that jurisdiction. London is an attractive alternative.

Property is a popular area for investment. Record Hong Kong property prices are pushing Chinese investors to overseas markets where rental yields are higher. Buildings in London are cheaper per square foot than New York, Tokyo and San Francisco. But they also offer higher rents than most offering a stable investment and good return. Recent sales of iconic London buildings like “The Cheesegrater” are testament to that.

The UK has also become a target for trophy assets like football clubs. West Bromwich Albion, Wolverhampton Wanderers and Aston Villa have all been snapped up by Chinese investors.

Should we be worried?

Shortly after she became Prime Minister, Theresa May paused progress on the newsworthy Hinkley Point project (heavily invested in by China) amid concerns about cost — and security. This, alongside a review of the national security implications of foreign ownership in 2017, has led to confusing messages in the media and risks having a cooling effect on investment in the future.

But concerns about China “buying out” Britain appear to be unfounded. Historically, Chinese investments show a record of strictly adhering to UK laws and regulations, and a good record of corporate social responsibility.

But with China due to be the largest economy in the world by 2030 – with the proportion of the UK trade with China potentially increasing accordingly – it’s a growth market. We should be taking advantage of that.

What does it all mean?

Although Brexit poses new challenges, to prosper Britain needs to be open for business. We need to be open and inclusive, welcoming international investors. Chinese investors see that opportunity. And where China leads, other are bound to follow. Chinese investment should help boost the confidence of other investors. This confidence is hugely valuable.

Chinese investment in the UK is mutually beneficial. It’s creating jobs in the UK, generating green, low carbon growth and bringing prosperity and stability. The top 30 Chinese companies in the UK have a combined turnover of around £9.8bn and employ 20,000 people in the UK. Strengthening this relationship also provides big opportunities for UK firms to help deliver projects across Asia.

There had been concerns that the “golden era” of China investing in Britain may be drawing to a close. But these latest figures certainly point to a very different future. It will be interesting to see how things progress as the value of the pound begins to rise.