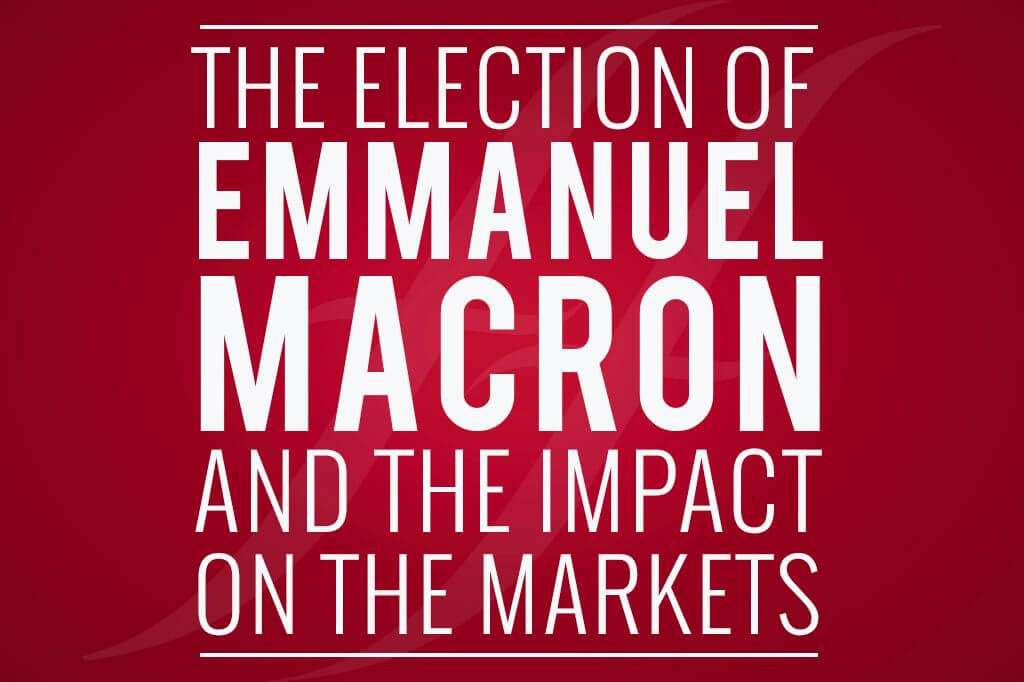 The election of Emmanuel Macron and the impact on the markets

Last month, Centrist candidate Emmanuel Macron was elected as France’s new president. The result wasn’t a great surprise, although it was perhaps more of a decisive victory than expected. We take a look at what this result is likely to mean for the markets.

Macron, a strong advocate for Europe, was up against Marine Le Pen. In direct contrast to Macron, Le Pen planned to take France out of the euro. Analysts warned that this so-called “Frexit” would have been more economically damaging than Brexit due to the common currency, threatening the stability of the EU itself. Understandably, that thought made the markets a bit frisky.

Macron’s success cheered the markets further. It effectively eliminated the uncertainty regarding France’s ongoing membership of the euro. Immediate market reaction was relatively modest as, by the time the election came around, it was fairly well anticipated. But the announcement still saw the euro reach a six-month high against the dollar. Stock markets surged and bond yields fell sharply.

There has since been a slight drop in the euro and weakening of French stocks as attention turns from the actual result to the challenges of implementing the reform agenda. But Macron’s planned reforms are expected to be favourable to long term growth. He is focusing on corporate taxation, education and the country’s competitiveness. Having said that, the presidential election result, in and of itself, doesn’t change the kind of fundamental stuff that affects the French economy. There is still the forthcoming parliamentary election this month. This will provide more clarity on the amount of freedom Macron will be granted to implement his policies.

Whilst there are several potential outcomes for the next round of French elections – not least because Macron’s party En March! is very new – the outlook is generally positive. It’s thought that if Mr Macron performs well in the June elections, investors will turn their attention more to economic indicators rather than political ones.

Any political uncertainty across Europe makes for instability in the markets. With French, and Dutch, elections out of the way, this political uncertainty has been reduced. This factor, alongside improving company profits, should over the medium term attract another wave of investment into European stocks.

It should also allow for market attention to refocus on broader issues: central bank policy, the uncertainly around US tax reform and financial deregulation to name but a few.

So, will the election result spur the European Central Bank (ECB) into raising rates? Nothing is likely to happen until after the next round of French elections. But the pressure to normalise rates could then be on. They’ve been talking about it, but those talks are likely to intensify. There is perhaps scope for a move to get out of negative interest rates which are having an adverse effect on the banking system? But they may choose to focus on tapering their quantitative easing policy instead.

Macron certainly dislikes the idea of Brexit. But if forced to choose, he’d be in favour of a hard Brexit. The suspicion is that our Brexit negotiations may prove tougher with Mr Macron in post. He doesn’t believe the UK should be given “the best of both worlds”. But he does want to maintain a strong relationship between France and the UK. It might take a while to find the right way to do business, but the intent appears to be there.

The result of the UK election is inevitably causing some disruption to the markets, and then there’s the Italian election due to take place in March next year. So it will be some time yet before markets are able to take their eye off the political landscape to any great extent. But the election of Macron was almost certainly a kinder result market-wise than a win by his main opponent would have been.