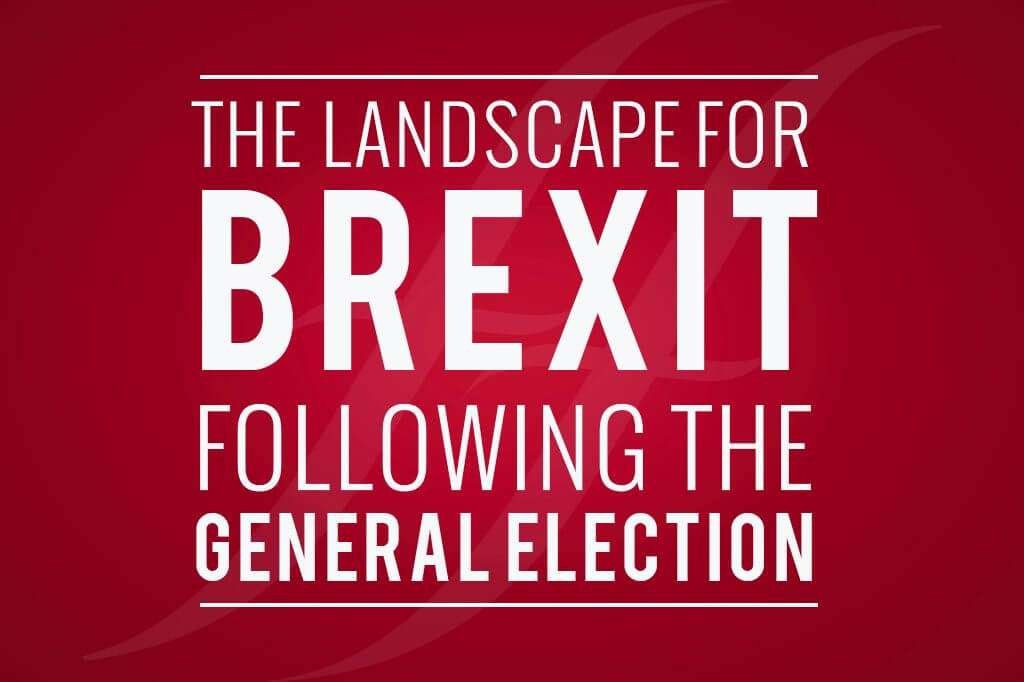 The landscape for Brexit following the general election

Even those who claim no interest in politics whatsoever can’t fail to have noticed the waves created by last month’s general election.

In case you’ve been in hiding, the details in a nutshell are:

One of the big follow-up questions from all of this has been what does it all mean for Brexit?

What does the election result mean for Brexit?

There’s no question that Brexit will still happen. But there seems to be few other certainties surrounding the matter, other than the fact that reaching a deal just got harder, with (pardon the pun) a “hard Brexit” looking less likely now.

The immediate effect is greater political and governmental uncertainty in the UK which has a series of knock-on effects:

The EU Member States (EU27) will worry about the ability of a weak UK government to manage domestic compromises on key issues. A government weakened by a smaller majority could leave Britain’s Brexit negotiators having to persuade their own ministers and also the parliament on every compromise they make.

To be acceptable domestically, this deal must minimise the economic risks inherent in Brexit and not put Parliament in a position where it is forced to test Theresa May’s proposition that “no deal is better than a bad deal”. If it came to such an outcome, there is now a chance that Parliament would hand the deal back to the electorate in a second referendum.

The EU27’s position has been strengthened. They may use that to insist on an “our way or the highway” approach.

2. Delays to the Brexit process

Jean-Claude Juncker, head of the European Commission, was ready to continue Brexit talks the morning after the election result. But it’s not that straightforward.

May has to get her house in order first. She’s got to convince her own party, not to mention the rest of the population, that she is capable of leading us through the negotiations. There’s a lot of trust and confidence to be built.

3. A lower likelihood of a “hard Brexit”

The merits of a “hard Brexit” (a clean break from the EU) versus a “soft Brexit” (requiring more compromise and keeping closer ties with the EU) has been a hot topic throughout the Brexit debate. Theresa May is all for a hard Brexit.

But the Conservative Government’s need for support in Parliament means that it will be under pressure to soften its stance, not least because the DUP are in favour of a soft Brexit.

Brexit Secretary David Davis indicated the Tories have lost their mandate to take the UK out of the single market without a majority, saying of British voters, “that will be their decision”.

What does this mean for businesses?

Life just got harder for businesses trying to plan for the consequences of Brexit as the period of speculation and uncertainty is prolonged.

Many business owners are alarmed by the PM’s determination to curb net immigration to “tens of thousands a year” when no one can identify the businesses whose labour supply will be restricted.

This restriction would inevitably spell a departure from the Single Market. The UK would lose influence over the rules by which British exports gain access to their major market. This will increase the regulatory burdens for UK-based businesses and have negative knock-on effects for foreign investment.

It’s likely that the final deal that the British side will seek will aim to combine the agreement to withdraw from the EU with some complex form of enhanced free trade agreement. But it’s all still speculation.

The EU has made it clear that it expects “sufficient progress” to be made on the so-called divorce deal (the UK’s exit bill, citizens’ rights, the border in Ireland) before it will begin to discuss a future trade deal.

A year on from the Brexit referendum and the effects are slowly making themselves felt. JP Morgan has announced it’ pulling 1,000 bankers out of London while Deutsche Bank is withdrawing 4,000, almost half of its staff in the country.

Is there any silver lining?

In a situation where we could really use a strong and stable government, we seem to be without one. It’s easy to see a lot of doom and gloom, but are there any up sides to all this?

Well, if we’re trying to put a positive spin on things, it could all lead to a more democratic and accountable Brexit.

And all the uncertainly in the UK had led to a falling pound and shares rising. That has helped investments increase.

The Article 50 clock continues to count down to 29 March 2019. The EU27 are as keen to move on beyond Brexit as are the Brits. A failed Brexit negotiation is no more in the EU27’s interest than it is in the UK’s. For the sake of businesses and individuals, we’re all hoping to see some concrete outcomes soon.