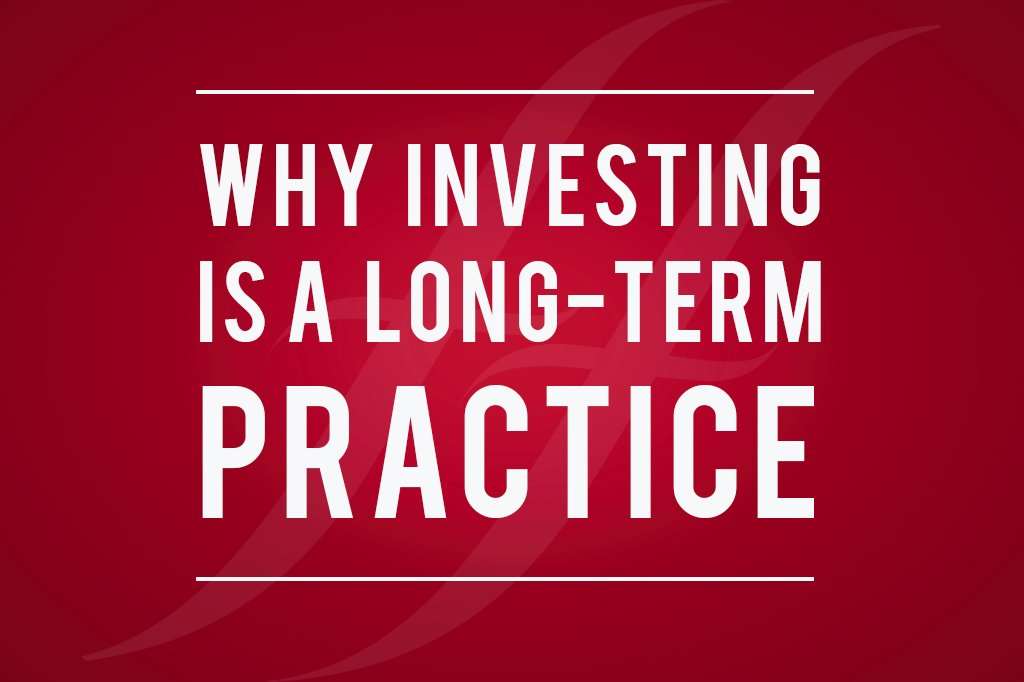 Why Investing is a Long Term Practice: A Case Study

It’s no secret that to get the best returns on your investment, it pays to keep your money invested for the long term.

You’re not going to make a fortune overnight. Nor are you going to get the most from your money if you cash out as soon as there is a dip in the market.

Don’t just take our word for it, we can illustrate our point too. Take a look at the below graph.

This graph shows the performance of the FTSE 100 over the last 15 years.

The green line shows the performance of the FTSE 100 as if you had remained invested for the whole 15-year period.

The graph also shows the same person selling out of the FTSE 100 for cash again on 23rd March 2020 and remaining in cash to date.

The impact of cashing out in numbers

You can clearly see that as a result of cashing out of the FTSE 100 in March 2009 the performance of the red line is far below that of the green line. But let’s add in some figures here to help show the difference more accurately.

By 5th April 2012, three years after the person cashed out:

Then on 23rd March 2020 the red line cashes out again due to a dip in the markets. By 17th July 2020 the green line has already recovered 29.64%. The red line, however, is still holding cash and so does not benefit from the market bounce back. Instead, they are still feeling the effects of the market crash.

Cashing out could mean missing out

The chart perfectly illustrates how you could end up missing out if you choose to cash out during a downturn. If and when you eventually do invest in the FTSE 100 again, you will be starting off on the back foot. Gains will be made but your progress will always be markedly lower than if you had stayed invested.

Everyone is different so, understandably, respond to risk in different ways. Some may be excited at the opportunity to invest more money in a market downturn. Others are more concerned with minimising their losses.

Moving to cash in a market downturn is usually a move to safe ground, but at what cost? By switching to cash during these times, you could be missing out on a bounce back of the markets. Which the red line did in the year when they were only holding cash. No one can tell how long the markets will stay down for, but they will always recover. If you don’t stay invested, you could just end up consolidating your losses.

Investing is a long-term practice

It is important to remember that timing the market is basically impossible. No one can be sure when they are about to fall or recover so trying to improve your prospects by guessing the market is not recommended.

If you want to get the best results from your investment, stay invested in the long term! The longer you are invested, the easier it is to ride out the peaks and troughs in the markets.

How to stay motivated to stay invested

Financial markets are volatile things, so it’s understandable that at times it may be tempting to revert to cash. When you start to get a little nervous it’s a good idea to remember the reason you are investing in the first place.

When you began your investment journey you would have had an end goal in mind. Whether that was to be able to buy your grandchild their first house, or to fund your dream retirement in warmer climates. You would have set up a strategy which would get you to where you need to be when you need to be there. Cashing out prematurely will only hinder your efforts.

Reminding yourself of these end goals will help to keep you on track. Once you reach a place where you can comfortably do this, then it’s the time to consider cashing out.

Speak to your financial adviser

If you are considering changing your investment strategy, or the markets are making you nervous, speak to your financial adviser.

You should be having regular meetings to make sure your investment is still working for you anyway. If you want to make any changes before your next catch up with your adviser, we would always recommend getting in touch and moving your meeting forward.