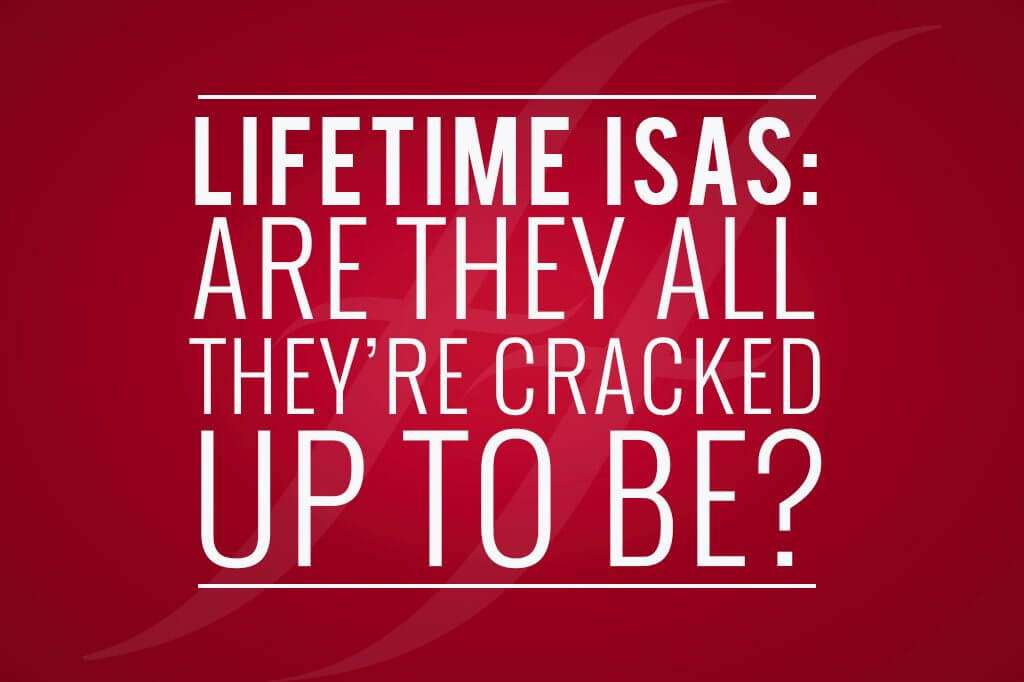 Lifetime ISAs: are they all they’re cracked up to be?

As financial advisers, it’s always interesting to see how new government initiatives are adopted by the industry, and by the general public. The Lifetime ISA is just such an initiative, first announced by George Osborne in his 2016 Budget. But it’s been met with a reception that we’d describe as lukewarm, at best. Why is that?

What is the Lifetime ISA?

The new Lifetime ISA (or LISA) was launched by the government in April 2017 as a way for people under the age of 40 to save towards their first home or their retirement. Individuals can save up to £4,000 a year, plus they’ll get a 25% bonus from the Government – that’s potentially a £1,000 bonus a year.

The funds must be used to purchase a first home worth £450,000 or less, or be left untouched until age 60. If they’re accessed before for any reason (other than critical illness), the saver will forfeit all their bonus, any interest made on it, and they’ll have to pay a 5% charge on top of that.

On the surface, the main proposition sounds pretty good – free money from the Government! So why are we not all jumping for joy? As ever, it’s all a bit more complicated than it first appears…

Why is the Lifetime ISA not a big success yet?

Looking at the evidence and watching with interest, we’ve identified a number of issues with the new Lifetime ISA which mean it’s not been the immediate success the Government were probably hoping for.

Recent research by Scottish Friendly shows that less than one in three adults have even heard of a Lifetime ISA. Awareness is lowest amongst the 18-25 age group, arguably the most important age group for this product. The government has no budget for promoting Lifetime ISAs, so it’s up to the industry to tell people about it.

Even if people are aware of the Lifetime ISA, very few seem to really understand the details. And deciding whether a Lifetime ISA or a pension is the best option for an individual is complicated. The best choice will depend on various factors including age and employment status. For example, a worker putting £1 into a LISA would get 25p from the Government. Compare this to a company pension scheme where an employer is prepared to match the employee contributions AND you get tax relief of 20% (if you’re a basic rate tax payer) – put 80p in to effectively get another £1 from your employer – a clear winner.

But even the self-employed need to be a bit wary. The hefty exit fees mean people can’t afford to confuse a Lifetime ISA with an easy-access savings account.

And there’s not much to recommend it for people who have already bought a house, as government contributions end at the age of 50. A pension will almost always be a better option here.

Many working within the pensions industry feel a bit cross about the Lifetime ISA. Just as more people were finally saving into pensions thanks to auto-enrolment, the Government has thrown something else in the mix to confuse matters.

This confusion means there is a real risk that the wrong people might take out a Lifetime ISA when they’d be better sticking with a pension.

There were very few providers actually ready with a Lifetime ISA product at the initiative’s launch in April. Providers are simply struggling to keep up with all the rapid changes in legislation. This means there’s been little promotion by the big banks, which would have helped with the awareness issue. It also means that anyone who was keen to get started has had very limited options to date.

The big one here: there are no guarantees that future governments will continue paying the 25% bonus to LISA savers. Ministers could choose to reduce payments, or do away with the scheme altogether. When that’s taken into account, along with everything else, many advisers still consider there are better options for young savers.

For most people, a pension is likely to be a better retirement saving strategy than a LISA. Their long-term perspective means young people are more likely to benefit from investing in higher risk, and therefore potentially higher earning, assets. Taking a shorter-term view with a LISA might encourage people to invest in less risky assets, impacting their potential returns.

Another complicating factor is that the current rules for LISAs make no provision for adviser charging. Currently, adviser charging – withdrawing money from a tax wrapper to pay for advice – is permitted on traditional ISAs and pensions. Without that permission being extended to LISAs, money withdrawn from a LISA to pay an adviser could incur a 25% penalty charge. That’s not great for our clients, and consequently, for us.

What’s the future for the Lifetime ISA?

With a general election on the horizon, it is hard to say! The Lifetime ISA does have the potential to become a staple savings option for young people. It could provide a helpful bridge between ISAs and pensions. And there is an interest amongst employees in further changes to pensions, but that seems largely rooted in a desire to make things easier to understand. But LISAs could be having the opposite effect.

As with all financial decisions, getting professional advice is key. This can prevent you from making a costly mistake by taking out an unsuitable product. But for Lifetime ISAs to become a serious contender, the government needs to do everything it can to remove the barriers that stop people taking expert advice. With previously announced Government initiatives falling flat, we think there needs to be more long-term commitment from the government and from providers to make the Lifetime ISA a success.

The value of investments and income from them may go up and down. You may not get back the original amount invested.