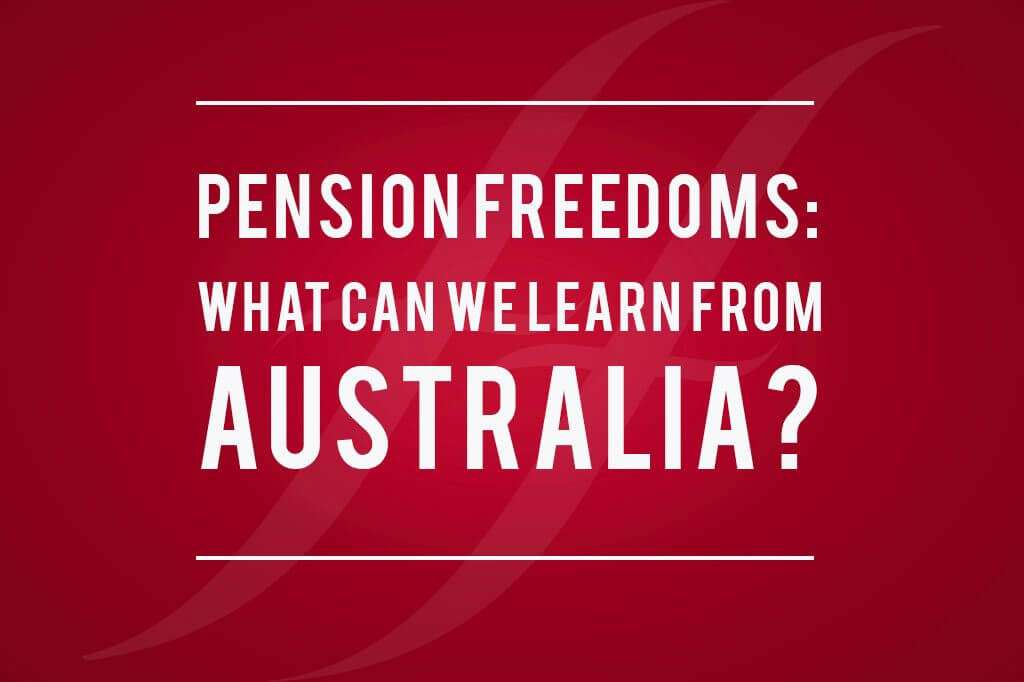 Pension freedoms: what can we learn from Australia?

In the 2015 Budget, then-Chancellor George Osborne handed new freedoms to over 55s to allow them to spend their pension fund as they chose. The Australian government did the same thing back in 1993. So presumably it’s working for them, and that’s why it seemed like a good idea to follow suit?

Why then is the Australian government now looking to reverse these very same freedoms? We look at why they’re travelling in the opposite direction and what, if anything, we should learn from their example.

What’s been going on in Australia?

Long before we had auto-enrolment here in the UK, Australia had a system of compulsory contributions by employers and employees known as superannuation. That means that Australians generally have a healthy provision for retirement, far bigger than the average pot in the UK. The trouble is that those savings are not always being used well.

In Australia, there is currently no real annuity market. An annuity offers a guarantee of income for life regardless of life expectancy and the vagaries of the investment markets.

The result is that 94% of pension assets are in account-based pensions, similar to income drawdown, where retirees have no guarantees about the income their pension might generate. And they can access the whole lot and do with it what they wish.

One of the problems is that pot is not being used purely for retirement. Some people are blowing it all for current lifestyle choices. Some people are racking up debts before retirement, knowing it can be paid off with their “windfall”. The result?

The Australian state pension provision is better than that in the UK. But with an aging population, that is under pressure.

On the other hand, there are people who, faced with the real risk of outliving their assets, are choosing to live more frugally in retirement and draw down assets at the minimum allowable rates. In the process of reducing their risk of running out, they’re also reducing the standard of living they can enjoy in their retirement. This fear of consumers to consume not only leads to poorer lives but also impacts on the wider Australian economy.

In a move to improve pension sustainability, the government has announced changes to its pension tax regime that will increase incentives to turn pension savings into a steady income.

They want to encourage a guaranteed lifetime income solution that allows retirees to manage longevity and investment risk more effectively. Retirees need the confidence to spend their pension money without worrying about running out, while also retaining some flexibility.

Why should the UK be concerned?

Prior to 2015, pensions in the UK were used to buy an annuity (this was compulsory for many years) or funds could be drawn down, but with limitations. New rules allow us to tap into the capital we have set aside for a pension in a much more flexible way. For many the cash on offer is likely to be just too tempting.

We need to be careful not to repeat the mistakes of Australia. Their example underlines how, without financial guidance to smooth the path, many people may make irresponsible decisions. This could leave them relying on the state for a larger period of their retirement. That is something both individuals and the government can little afford in this country.

Most pensioners need around 12,000 a year to live on. The state pension is only currently worth £8,060 if a person receives the full flat-rate, which not everyone does.

Fortunately, people in the UK are more used to the idea of annuity which might put us half a step ahead of the Australian experience. But we can’t be complacent. Annuity sales have fallen since pensions freedoms were launched.

We should be OK for the next decade or so, as many people retiring now have a significant pension income. But we need to learn lessons from Australia and take action before those less-prepared for retirement reach that age.

So what’s the answer?

For most people, there is a need to have a level of guaranteed income for life. Pensions freedoms do not necessarily encourage that. It can be hard to see beyond the value of cash in the hand now.

Both the UK and Australia need options that provide a level of guaranteed income for the rest of an individual’s life, with the flexible option of receiving a lump sum during the course of retirement. Annuities may still play a major role in that.

The question is how to encourage people to make wise choices. Do we need to remove the freedoms recently afforded? Or incentivise guaranteed income products, like Australia is now trying?

Some Australian pension commentators say the problems in Australia have been exacerbated by a lack of understanding around the value created by financial advisers. This has led to a DIY culture where longevity risks can easily be overlooked. So perhaps the real answer is educating people about the need to get financial advice. If people can understand advice as a wise investment, not an expense, we could prevent a lot of the pitfalls Australia has experienced.

For example, when someone comes to us at retirement, we run a cash flow analysis so we can advise on the best way to access your pension pot. We’ll look at the pot you have and base calculations on average UK life expectancy (we use 86). We can see that a certain fund will give you a certain annual income based on a certain return. We can also see when your fund will be depleted.

We’ll listen to any requirements or desires you have. We’ll then find the right balance to ensure your pension is used wisely. Critically, we’ll review everything each year to make sure you’re still on track for a comfortable retirement. That peace of mind is worth a great deal to most people.

Ultimately, freedom should be thought of in terms of not having to worry about whether we’ll have enough money to live a sustainable retirement, regardless of how many years that may be. If there’s a lack of government direction to support that, getting the right professional advice is one answer.