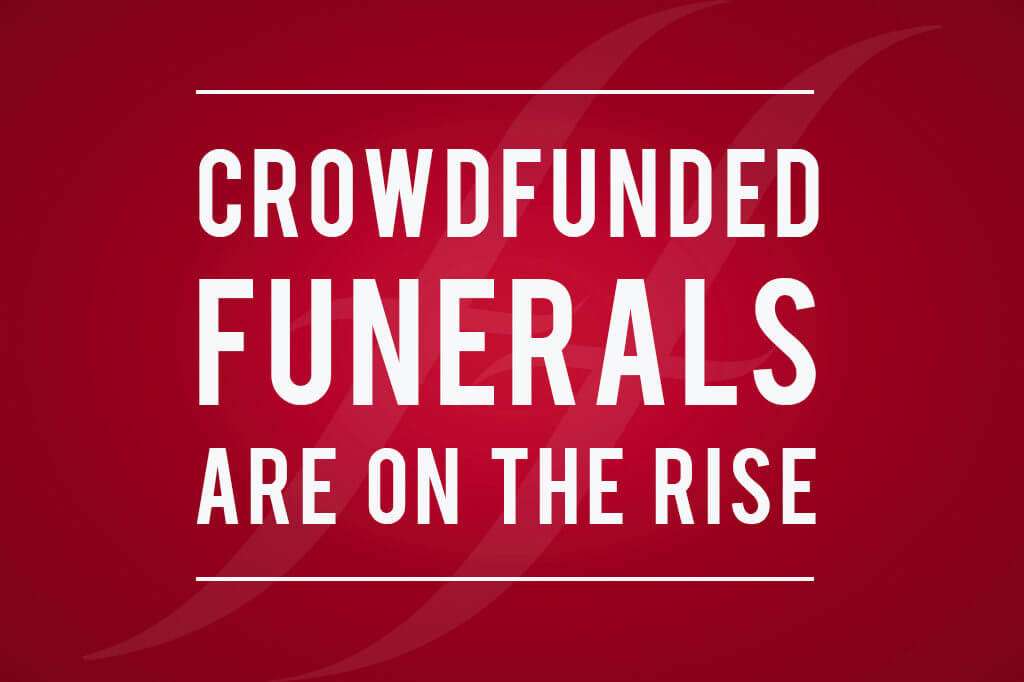 Crowdfunding for funerals is on the rise

It’s not something most of us like to think about. But we are all going to need a funeral one day. There is a worrying indication that, despite the inevitability of it, people are failing to plan how their funerals will be paid for.

The cost of funerals is rising

Funeral costs are raising fast. There are a number of funeral options varying in price, from direct cremations to burials using funeral directors. According to Sunlife, the average cost of a funeral is around £4,271. This is projected to rise to £4,944 in 2022.

If you haven’t left a means for your funeral costs to be covered, there is a chance that your family simply won’t be able to afford it.

In these instances, there may be some means-tested help from the government to help cover the funeral costs, but this will rarely cover the whole cost.

If there is absolutely no other option, the local authority or hospital trust will provide a Public Health Funeral. The family will have a limited say in proceedings. This option means no flowers, transport, headstone or choice in time or location for those who may wish to attend. A sad state of affairs.

How is crowdfunding making a difference?

Firstly, what exactly is crowdfunding?

Crowdfunding is a way of raising money for a project, through donations from members of the public. It has most commonly been used to support new inventions, business ideas or charity appeals.

Increasingly, families are finding they have to rely on the generosity of strangers via crowdfunding to cover funeral costs. Between January and September 2016, 2,007 crowdfunding pages were launched to pay for a funeral.

Even if you did go down the crowdfunding route, there are no guarantees that you will be able to raise the funds for the funeral you’d like. So it’s not what we’d call a reliable option.

How to avoid having to crowdfund your funeral

Ultimately, the best thing you can do is make sure you have funds allocated for your funeral.

There are a couple of options you could consider:

Life insurance – Life insurance is pretty self-explanatory. It is an insurance you buy which pays out when you die. It will help with covering costs for the family you may leave behind. This can include paying your mortgage, covering household bills or funding your funeral. Worrying though, only 27% of the UK population have life insurance.

Life insurance is one of those things that people tend to put off. They file it under the ‘sort it tomorrow’ section of their to-do list, but may never get around to it. One day, it will be too late.

Funeral cover – You have probably seen the adverts on the TV for pre-paid funeral plans. They allow you to pay for your funeral in advance, usually by paying in to your plan in monthly instalments.

The cover you receive for your funeral plan depends on the provider you choose. Most providers guarantee to cover the funeral directors’ costs for arranging and conducting the funeral leaving one less thing for your family to worry about during their difficult time.

All funeral cover plans differ from provider to provider. It is important to make sure that you do your research. Choose a provider that will suit your desired funeral choices.

Savings – Your estate can pay for your funeral costs if you have enough savings.

Whichever option suits you best, make sure you are prepared in plenty of time. It’s never too early to take out an insurance policy which will help cover any costs your family may face once you have passed away.

Thoroughly research the option that you are going to take. Find out if there will be extra costs incurred for your family upon pay out.

Dealing with the death of a loved one it is a difficult and emotional time for the family. The last thing you want to do is put more stress on those trying to organise your funeral. Having funds in place will allow them to give you the send-off you want and deserve.