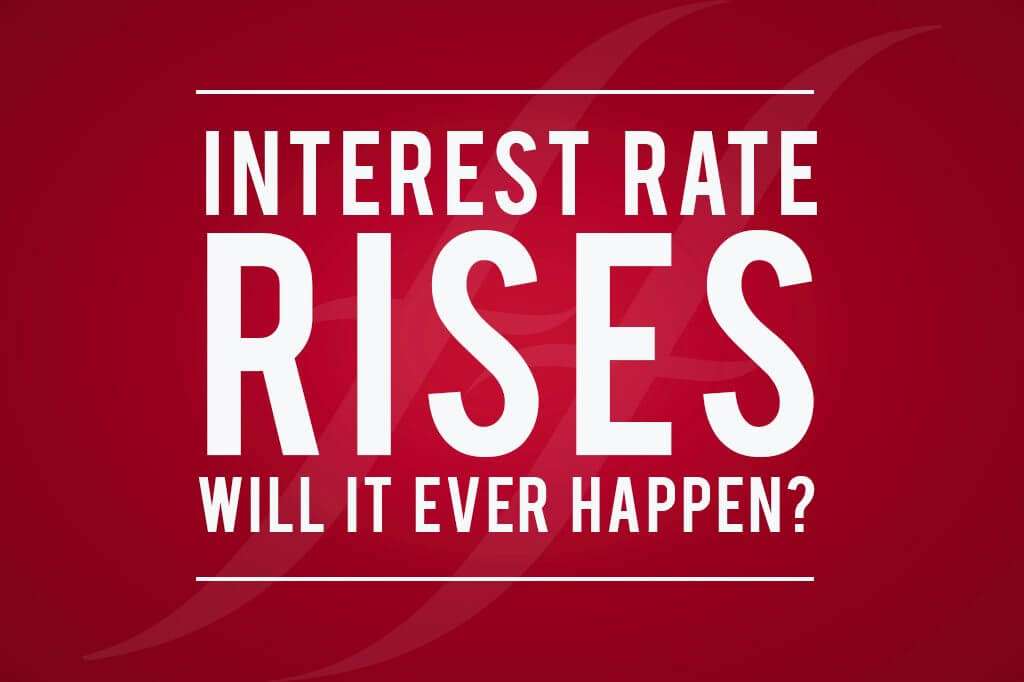 Interest rate rises – will it ever happen?

The will they/won’t they debate around raising interest rates has been rumbling on for several years now. But with the Bank of England announcing this month that they’re holding the base rate at their current 300-year low of 0.25%, how does the landscape look? And do we need to do anything to prepare for when the inevitable will (eventually) happen?

Where do things stand now?

Interest rates have been low for years thanks to the credit crunch. The Bank of England desperately slashed interest rates to try and save Britain from the worst of the recession. It wasn’t meant to last long. But things just didn’t improve for the British economy and rates have continued their move downwards.

After the Brexit vote, the Bank of England took further action to prevent the UK from falling into recession again. One of the measures they put in place was to drop interest rates even further to 0.25%, delivering a boost to borrowers through cheaper mortgages and loans, keeping money flowing through the economy. In fact, the economic slump predicted in the wake of the EU referendum failed to materialise.

Strong economic growth following the Brexit vote and higher inflation (buoyed by a weaker pound) had raised calls for interest rates to rise.

The Bank of England’s Monetary Policy Committee (MPC) are the ones to set interest rates. They are tasked by the government to keep inflation to a 2% target and maintain financial stability. Traditionally, if inflation was rising, so would interest rates. The idea was that this would encourage saving, meaning people would spend less money and prices would fall again. Things haven’t been as simple as that for a while.

The recent sharp rise in inflation, peaking at a near four-year high of 2.9% in May, has coincided with a slowdown in economic growth. Household budgets have suffered as wages have failed to keep pace with inflation. Consumer spending has slowed, knocking overall GDP growth.

When prices are soaring but wages are failing to keep pace, a rate rise could result in potentially millions of people and businesses going bankrupt, job losses and repossessions. Not good.

This month, just two votes out of eight in the MPC were in favour of an immediate rise. So rates remain on hold, waiting for things to improve.

What are current predictions for the future?

Inflation has been above the Bank of England’s target rate since February. Raising rates is the traditional way to bring this down.

The question the Bank needs to consider is whether inflation will naturally fall – which makes the decision to raise rates now unnecessary at best and dangerous at worst – or needs to be addressed. It is reluctant to risk economic recovery with a premature rate hike.

But Erik Britton, former Bank of England economist, sums up the argument for raising rates quite neatly:

“If we can’t do it when inflation is above target, when unemployment is at its ‘natural rate’ and when growth is reasonable, I don’t know when we’re going to do it.”

In its report this month, the Bank outlined market predictions of a rise back to 0.5% in the middle of 2018. Some say this rise could come as early as February, with a move to 0.75% in August 2019. Others put the timing for the first rate rise closer to the third quarter of next year.

Prior to this month’s decision to hold rates, one poll of 80 economists said rates will not rise until 2019, ending that year at 0.75%. Other reports seem to suggest economists broadly agree that the economy will recover in 2018, triggering a rise in rates before Britain leave the EU in 2019.

So it depends who you ask! And the truth is that we just don’t know. Predictions can be based on movements in the market. Others come from economists. But often the two don’t tally. And both markets and economists haven’t had a great record of making the right call in recent years.

What should you do to prepare?

A staggering 8 million Brits haven’t seen interest rates rise in their adult lives according to one financial platform. They could be in for a rude awakening!

It’s been more than a decade since interest rates last rose. With the current economic conditions, it does look likely to happen within the next couple of years. But we just don’t know when.

General expectations are that any rate rise will be gentle and slow. But Mark Carney, the governor of the Bank of England, has said they were likely to rise by more than the markets are expecting.

Our key message: don’t panic! We got used to regular rate rises in the past. We will do so again. But it may be wise to prepare.

A rate rise will increase borrowing costs, but will also mean better returns on savings. So whether you win or lose largely depends on where you sit on that savers/borrowers spectrum. Borrowers ideally need to plan ahead to minimise the impact of any rate rise.

Homeowners with mortgages (or other large debts) are the ones who need to be most cautious. Those who have borrowed at reduced levels are likely to face increases in their bills in the near future.

The cost of an interest rate hike will vary depending on the terms of your mortgage. Figures from Moneyfacts show that a family with a £200,000 mortgage on a 25-year term will pay almost £25 a month extra if the rate goes up by 0.25% – almost £300 a year.

If you’ve not reviewed your mortgage recently, it would be wise to do so. Switching to a better rate now, and fixing that rate, could cut monthly payments substantially and remove any immediate vulnerability to the impact of an interest rate rise.

Low interest rates can lead an interesting conundrum – are you better putting spare money in savings, or overpaying your mortgage (if yours gives you that option)? Taking advantage of the current relatively cheap repayments to pay back more of your debt means lower repayments in the future. Particularly handy if/when rates do rise. But you must be confident that you can afford to do this, and that you still have enough savings to cover life’s emergencies.